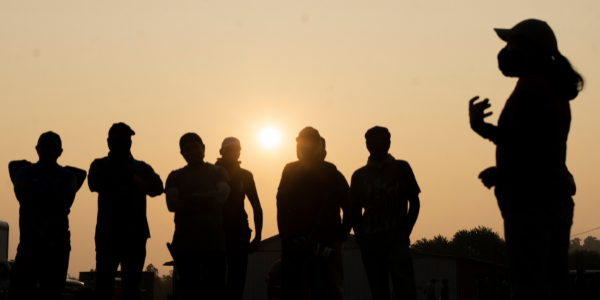 Relief from the Heat

“Workers Are Dying Of Heat Outdoors Without Standards To Protect Them,” (NPR, 8/17/21)

Those are just a few of the countless headlines in papers across the country warning of the growing threat to farmworkers, and other outdoor workers, posed by steadily rising temperatures as the real-life impacts of long-term climate change become manifest.  Rachel Licker, a senior climate scientist with the Union of Concerned Scientists (UCS) and an author of a recent UCS study on the threats posed to outdoor workers by the increasing number and intensity of dangerous heat waves, perhaps said it best in an interview this month with National Public Radio:

“The last seven years have been the hottest on record,” said Rachel Licker, the senior climate scientist and an author of the UCS report, said in a statement. “Without additional protections, the risks to workers will only grow in the decades ahead as climate change worsens, leaving the roughly 32 million outdoor workers in our country to face a brutal choice: their health or their jobs.”  (read more)

The same NPR story goes on to address the lack of state and federal protections for farmworkers and other outdoor workers and to recommend several key policy changes to prevent and remedy heat stress in the years to come:

In addition to the heightened risks posed by climate change, the UCS report highlights the lack of federal worker protections as a major issue for worker safety.

As NPR has previously reported, at least a dozen companies have had multiple employees die from environmental heat exposure. The Occupational Safety and Health Administration (OSHA) has not adopted a national heat standard to safeguard workers and often decides not to penalize companies for worker deaths…

“We know this risk is worsening and has significant implications for workers, employers and the broader economy, so we need to be prepared,” Licker said.

Last week, following weeks of research, data collection, and discussion, the Fair Food Program stepped into this breach and established important new heat safety standards for farmworkers under the FFP’s protections.  In consultation with the Fair Food Standards Council (the third-party monitor that enforces the Fair Food Program Code of Conduct on Participating Farms), and with Participating Growers on the FFP’s Working Group (a collaborative body at the heart of the FFP that provides essential feedback on emerging issues necessary to develop practical regulations designed to remedy those issues), the CIW set forth enforceable standards requiring mandatory breaks; comprehensive, trilingual training; and emergency response protocols, effective immediately, on all Fair Food Program farms.

This is, of course, not the first time the FFP has responded quickly and concretely to unforeseen, emerging threats to workers’ health and safety.    The COVID-19 pandemic represented another such threat that — unimaginable just a decade ago when the Fair Food Program’s original Code of Conduct was drafted — required the quick and effective promulgation of new standards to prevent the spread of the deadly virus on FFP participating farms.  And just as it did in the case of heat stress and rising temperatures over the past many weeks, the FFP’s Working Group met last year over a series of weeks before the FFP established the agricultural industry’s first mandatory, enforceable COVID safety protocols that made an immediate and real impact on workers’ lives.  One of those workers, Antonia Rios Hernandez, spoke to the New York Times about her experience on an FFP farm in an article from earlier this year titled, “Voices from the Front Lines of America’s Food Supply.”  Here’s an excerpt:

I worked on and off over the years. I worked for the last full season here, including during the pandemic. I started in August of 2019 in planting, then I worked all the way to the end of harvest, around May or June last year.

It’s a long day, it’s very challenging work. We would be picking, for example, cucumbers in the morning and tomatoes in the afternoon and they’re both very heavy work. My fingers would hurt by the end of the day. It hurts your back and makes your lungs ache to work that hard. I would sometimes come home and would just cry.

We were working long days, but they put a lot of protections in place. Lipman Family Farms were a part of the Fair Food program, and followed the procedures.

We would clean all of the tables with Clorox or bleach and make sure that everyone was washing their hands well. Thank God no one I know got sick. I wasn’t too afraid of the pandemic because of the precautions that the company was taking. They hired people specifically to clean the buses every day.

The ability of the Fair Food Program to tackle and remedy some of the most pressing threats to workers’ health and safety today — from COVID to extreme heat —  is truly unique among social responsibility programs.  The FFP has repeatedly proven itself nimble enough to direct its already existing, best-in-class monitoring and enforcement mechanisms toward the enforcement of new standards with unparalleled efficacy. Moreover, the partnership among workers, growers, and buyers at the heart of the Fair Food Program is able, with the help of the FFP’s unique Working Group, to identify and address those emerging threats in an environment of collaboration and mutual respect, arriving quickly and effectively at new, enforceable protections every time the world throws us a new curve, saving countless lives and showing the way forward for workers in corporate supply chains across the country.

We’ll give the last word on today’s news to one of those key grower partners, Jon Esformes, CEO of Sunripe Certified Brands (formerly Pacific Tomato Growers, the very first major grower to sign a Fair Food Agreement back in 2010) and a Working Group participant since its inception:

As circumstances on the ground evolve, circumstances like the worsening climate crisis, Sunripe Certified Brands is grateful for our partnership with the Coalition of Immokalee Workers and our participation in the Fair Food Program. Through that partnership I am confident that we will continue to insure that our farms continue to deliver on the promise of a safe and fair workplace for everyone who honors us with their work.