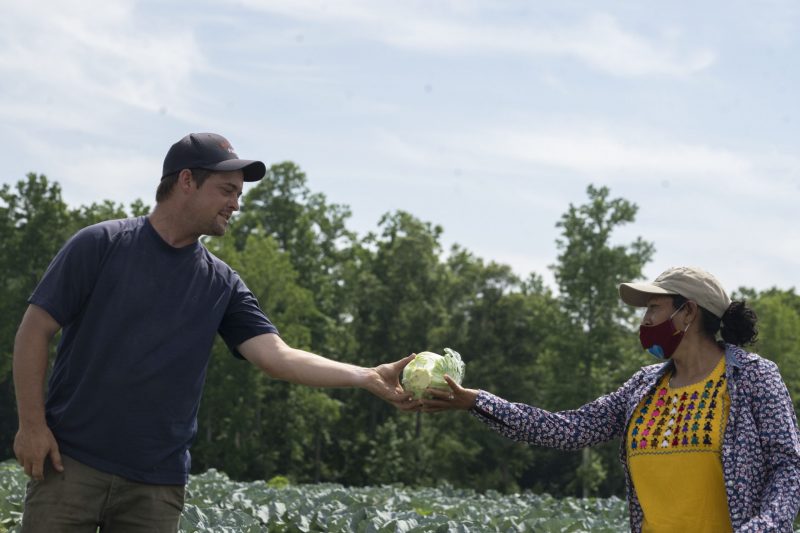 Farmer Randall Watkins on joining the FFP: “Having workers that feel valued and respected gives them passion and a love for what they do. It builds confidence and empowers them to speak up and seek help when needed. I want to make sure all my workers are protected and rewarded at the end of the day.”

Happy Dirt CEO Sandi Kronick: “When it comes to social, environmental, and economic sustainability, there’s not a finish line that you just cross… programs like the Fair Food Program help us to continue to look for ways to build upon our sustainability impact and promise. “

Today’s the day!  Watkins Farm, an organic sweet potato operation in North Carolina, has officially joined the Fair Food Program as a Participating Grower with the help of Happy Dirt, which pools organic produce from 90 farms across the region. Longtime FFP Participating Buyer Whole Foods Market was instrumental in setting up the conversation between Happy Dirt and the Fair Food Program.

FFP teams completed entry audits and worker-to-worker education sessions in June 2021, and today, on the 10-year anniversary of the Fair Food Program, we’re celebrating the official public launch of the partnership.  The inclusion of Watkins Farm marks an expansion into a new state, and a new crop, for the Program, a fitting way to mark the start of the next decade.

Read the full announcement below:

“At Happy Dirt we are very privileged to be able to partner day in and day out with top notch customers and farmers who not only care about the quality of the product, but who also care about the success and wellness of the people behind those products,” said Sandi Kronick, the company’s CEO. “When it comes to social, environmental, and economic sustainability, there’s not a finish line that you just cross. There is always room to grow and improve, and third-party audit programs like the Fair Food Program help us to continue to look for ways to build upon our sustainability impact and promise. “

By joining the Fair Food Program as a Participating Grower, Watkins Farm is committing to ensure safe, fair, and dignified working conditions in its operation. The FFP’s unique mix of monitoring tools — including comprehensive field and farm office audits, a 24/7 trilingual complaint hotline, and worker-to-worker rights education — has been praised by human rights observers from the White House to the United Nations. Failure to comply with the FFP’s Code of Conduct can result in market consequences for Participating Growers, giving the FFP’s human rights standards real teeth and resulting in a decade-long track record of measurable progress on participating farms.

Happy Dirt, which pools produce from more than 90 farms in the region, was approached by Whole Foods Market, an FFP Participating Buyer since 2008, to explore the possibility of Happy Dirt farms becoming Participating Growers. Kronick says the question was a “no-brainer”: “I had no doubt that most of, if not all of, our farmers would qualify for it. The fact that Randall Watkins was the first farmer to say yes to the Fair Food Program speaks to Randall’s commitment to the values that he has as a farmer and as an owner of Happy Dirt. It also speaks to his commitment to innovation.”

Watkins said he chose to sign up to the Fair Food Program so that his team would feel valued. “Having workers that feel valued and respected gives them passion and a love for what they do. It builds confidence and empowers them to speak up and seek help when needed. I want to make sure all my workers are protected and rewarded at the end of the day. Farm work is hard and harvest days are long, so when you have great workers, you have a successful team working for the same mission and outcome.”

November 1st marks the ten-year anniversary of the Fair Food Program, which earned a Presidential Medal in 2015 for its “extraordinary efforts” in combatting forced labor in agriculture. The FFP was called “the best workplace monitoring program in the U.S.” on the front page of the New York Times and one of the “15 most important social impact success stories of the past century” by Harvard Business Review.  The Program’s unique Worker-driven Social Responsibility (WSR) model ensures enforceable protections for farmworkers, including the right to work free of violence, retaliation, and sexual assault, along with industry-leading health and safety protections including groundbreaking COVID-19 and heat stress illness prevention and response protocols.

“We’re excited to welcome Watkins Farm into the Fair Food Program, and to celebrate this expansion into a new crop for the Program,” said Gerardo Reyes Chavez, a CIW leader and former farmworker. “This expansion puts us one step closer to the vision of a U.S. agricultural industry that we set out to build 20 years ago when we launched the Campaign for Fair Food, an industry where all essential farmworkers have a voice at work and are treated with respect, and where consumers can rest assured that the food they eat is not only nutritious but is also harvested with dignity. We look forward to expanding our promising partnership with Happy Dirt into the future as a key part of realizing that vision.”

The Coalition of Immokalee Workers is a human rights organization and Presidential Medal recipient internationally recognized for its achievements in the fields of social responsibility, anti-sexual violence efforts, community organizing, and ending slavery.  The CIW’s Fair Food Program is a groundbreaking partnership among farmworkers, growers in eight states and multiple crops, and fourteen major food retailers that buy Fair Food produce.  Those Fair Food Participating Buyers agree to purchase from suppliers who meet a worker-drafted code of conduct, which includes a zero-tolerance policy for slavery and sexual harassment.  Buyers also pay a “penny-per-pound” premium, which is passed down through the supply chain and paid out directly to workers by their employers to address longstanding farmworker poverty. Since the program’s inception in 2011, Buyers have made nearly $39 million in FFP premium payments. For more information, visit www.fairfoodprogram.org and www.ciw-online.org

Happy Dirt is a certified B Corporation that connects retailers and food businesses with organic (and conventional) produce. The company started in 2004 with the goal of helping transition tobacco farmers in North Carolina into organic vegetable production to meet an increasing need for local, organic produce in the marketplace. Now the company pools diverse harvests from over 90 farms in different regions in order to meet the demand for a steady stream of high-quality, seasonal food choices throughout the year. Happy Dirt is not only committed to environmental sustainability, but it is also committed to the social and economic sustainability of its farmer partners and staff. Learn more at www.happydirt.com